The economy has rocked a number of local nonprofits, putting a dent in donations just as they were taking on the burden of increased social needs. Many of these charities have turned to foundations for increased support.

Philanthropic foundations have managed charitable giving since an endowment was established in ancient Greece to fund Plato’s Academy, a legacy that lasted for centuries. But the long-standing practice came under its own pressure when the downturn in the stock market strained foundation investment portfolios.

Many national and Capital Region foundations adjusted how they spread the wealth to fit the new reality. In a recent Foundation Center report, “Moving Beyond the Economic Crisis: Foundations Assess The Impact and their Reaction,” Director of Research Steven Lawrence surveyed funders about the long-term impact of the economy on their operations and grant priorities. After many foundations adjusted operations in 2009 due to the economy, giving leveled off in 2010 and could increase slightly in 2011.

“Although it will probably be several years before giving matches the peak level recorded in 2008, about 21 percent of respondents to the September 2010 survey indicated their giving will rise next year,” Lawrence wrote in the report. Nearly 60 percent said giving would stay the same in 2010.

Of course, not all foundations are the same.

Nationally, the survey showed corporate foundations as most likely to anticipate an increase. In the Capital Region, however, some of the largest corporate foundations are linked to construction operations, an industry still digging itself out of the downturn. Fred Teichert, executive director of Teichert Foundation, says, “We are directly tied to Teichert Co., which is still getting a [handle] on the economic challenges linked to the housing decline.” He credited the organization’s foresight to save during good years to sustain giving and the foundation’s ability to maintain its support levels in 2010.

Many corporate foundations focus on specific areas. Teichert awarded grants in 2010 to organizations as diverse as the American Cancer Society, Boys & Girls Club, Habitat for Humanity and the Crocker Art Museum. In the past decade, GenCorp Foundation has given more than $7 million, mainly for science, technology, engineering and mathematics education projects. Similarly, the Vanir Foundation, which was established to honor founder H. Frank Dominguez, focuses largely on education and health programs for children in at-risk communities.

Community foundations have their own framework for meeting changing needs. Most, like the Sacramento Region Community Foundation, pool tax-deductible donations and administer both discretionary and specific endowment programs. While much of the foundation’s funding is from estate plans, annual giving from living donors can be volatile based on the economy.

Foundation CEO Ruth Blank was still looking for the upside in November. With one critical donor month left in 2010, she saw a little less giving than in 2009, but more than in 2008.

“Small gifts can be leveraged to make a big difference. You don’t have to be Bill Gates or Warren Buffet to make a difference.”

Blank predicted that more nonprofits would rely on boards to raise funds until the economy really picks up. “Where there is more to share, more is shared,” she says.

Solano Community Foundation launched in 2000. As a small community foundation in an area devoid of large corporate donors, President and CEO Stephanie Wolf says the organization is still building its endowed fund programs. “We don’t have the luxury of dipping into an established fund to make up the difference later,” she says. The organization has cut operations and is moving to a smaller office to cut costs.

At the same time, the needs are increasing. The Solano Community Foundation helps individuals and large corporations channel their giving into programs that support everything from coats for the homeless to arts programs in the schools, veterans’ services and environmental preservation. “Small gifts can be leveraged to make a big difference. You don’t have to be a Bill Gates or Warren Buffet to make a difference,” Wolf says. “We have to do it together.”

Many of the survey respondents nationally and locally say they shifted the types of organizations they funded the past two years because of the increased social needs. About 40 percent of national respondents had made some type of modification to their charitable priorities. Less than 8 percent of respondents expect these to be long-term changes.

Teichert says that he, too, made a higher percentage of gifts to safety net operations, but intentionally did not neglect cultural and youth grants because they were also hurting during this critical time.

At community foundations, executive directors often have less discretion about what they fund because much of the money is earmarked in specific endowments. “Donors like our ability to honor a family’s wishes in perpetuity,” Sacramento Regional Foundation’s Blank says. Where she had the choice, she did channel more giving to organizations providing food, clothing and shelter, but was still conscious of other community needs. “People still support what they care about.”

The shift in giving trends has left a number of nonprofits scrambling to adjust to the new reality. “Nonprofits are trying to keep up with what foundations are looking for today,” Blank says.

Ann Lucas, director of the Sacramento Nonprofit Resource Center, says foundation giving comprises only about 12 percent of nonprofit funding. “The bulk of the support comes from individual donors,” Lucas says. People can be more reactionary than foundations, which often average their gifts over a number of years, making the source less volatile. “When the economic landscape settles, everyone is going to have to figure out how to adjust to the new normal.” 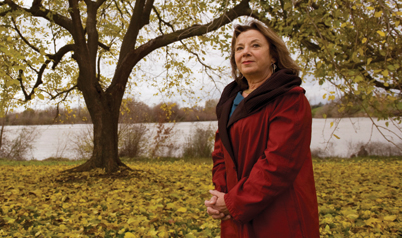 Banning together 12 years ago, a group of local women sought out to help foster youth establish healthy lives after emancipation.

After two decades of working in the nonprofit industry, Robin Chronister, an executive assistant for Mother Lode Rehabilitation in Placerville, noticed a gradual but clear change in the nonprofit sector.