The wine tasting room at Harmony Wynelands in Lodi was built with a far different purpose.

The wood-paneled room is lined with cabinets that hide the organ pipes, there are chimes posted on the walls and a piano sits on the second-floor loft.

MacKay’s stepfather, Bob Hartzell, an aficionado of old-fashioned theater pipe organs and former president of the California Winegrape Growers Association, built the hall to house his pride and joy – a 1921 organ that was once installed in the Castro Theatre in San Francisco. The room’s acoustics are specially designed to show off the organ’s commanding sound.

Hartzell fell in love with the theater pipe organ when he first heard one while attending double-feature movies as a teen-ager. “I thought ‘Wow, this great,’” he says. “I never got over it.”

A piano player since age four, Hartzell learned how to play the organ in high school and has restored several. So when Hartzell learned the pipe organ was available, he jumped at the chance to buy it. 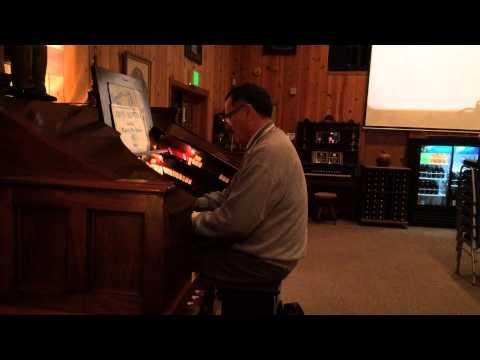 Now, Harmony Wynelands regularly hosts showings of silent movies accompanied by the organ.  While Hartzell plays the instrument occasionally, he leaves the the silent movie screenings to Sacramento organist Dave Moreno who chooses music to accompany the movies.

“I don’t play as well as I used to,” explains Hartzell. “That’s a little disappointing. I’m 80, so playing for a half hour straight exhausts me.”

The Hartzells grow  Zinfandel grapes, and initially sold them to other wineries. Hartzell began bottling his own wine in 1997 at the suggestion of his then new wife Linda, MacKay’s mother.  Harmony Wynelands sells Riesling, Chardonnay and Alicante Bouschet at the winery, from its website or to wine clubs.

MacKay’s own Pipe Dreams Label, first released in 2008, is a nod to the Castro Theatre organ, and a reference to his philosophy of life: Anything is possible if you can dream it.

These days, Hartzell has backed off from involvement in day-to-day operations. His wife Linda and son MacKay run the family business. Hartzell doesn’t play the organ as much as he used to, though he  still loves music — some of it, at least.

“He thinks music got bad after rock and roll,” MacKay says, laughing.

Harmony Wyneland’s next silent movie showing is Dec. 19 and will feature holiday shorts, including possibly some Laurel and Hardy and Little Rascals classics.

Check back tomorrow for more about the burgeoning Lodi wine scene in Russell Nichols’ December feature, “Taste the Vineyard.” Sign up for our newsletter and we’ll email you when it goes live.