Back Commentary Sep 1, 2020 By Winnie Comstock-Carlson 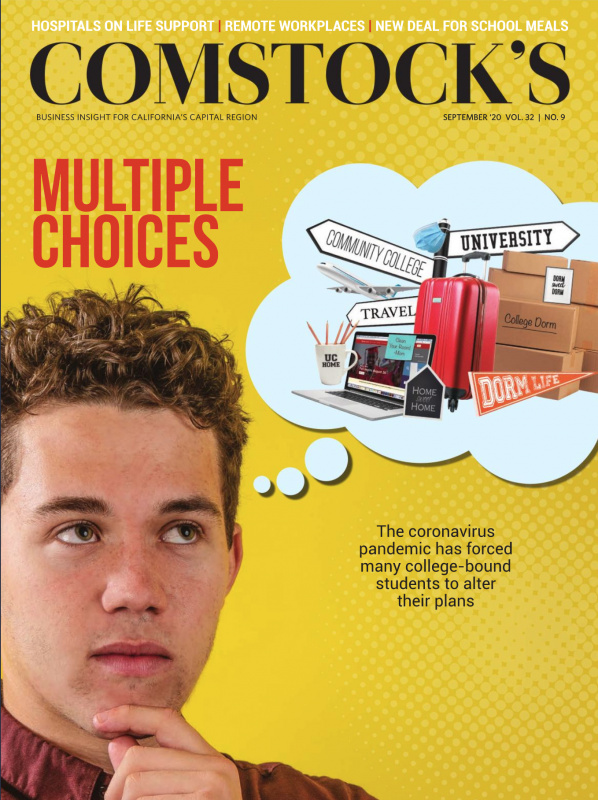 This story is part of our September 2020 issue. Click here to subscribe.
It’s September, when children typically are zooming off to start a new school year. But with COVID-related restrictions in place, classrooms in the Capital Region’s counties on Gov. Gavin Newsom’s health watchlist are empty, at least for now. There is no morning rush to the school bus. The dining room table is the new classroom.

Given the new and widespread surge of COVID-19 infections this summer, there is no question that distance learning is critical to protect public health, but it also poses unprecedented challenges that are not limited to students and teachers.

With children going to school in the next room, parents become a substitute for the presence of a teacher instead of playing a supporting role. That upends household routines like a tumble dryer with people who are juggling working from home or needing to leave home to work.

Students and teachers are missing out on what some educators call the magic moment of learning, when a light bulb goes off in a student’s head and a lesson is learned.

With distance learning, many children also are falling behind. The “summer slide,” the loss of knowledge between the end of one school year and the beginning of the next, is getting faster and steeper. Many school districts in the Capital Region have reported that, without adult supervision, as many as half of their students have not kept pace with classes after several months of distance learning.

Mackenzie Wieser, a mother of three and an Elk Grove Planning Commission member, is a parent facing this challenge. She says her high school senior and college freshman can navigate distance learning on their own, but she still has to juggle a school schedule for a second-grader with her job as a CEO of an environmental nonprofit. When school was disrupted in March, she said she had the luxury of playing teacher in the morning and working late into the night. And she thought it was temporary. “Still, it was so overwhelming,” she says.

Picking up the nine textbooks and workbooks, each about 200 pages, for her second-grader for the new school year pushed her over the edge. “You could just shoot me,” she says. She is turning to a growing trend and a modern version of the one-room schoolhouse, pandemic learning “pods.”

Wieser assembled a group of four students with two of her neighbors, with whom she splits the cost of hiring a teacher. The group is small enough for appropriate social distancing while giving the children more personal attention to help them with their distance-learning curriculum from the Elk Grove Unified School District and during their several hours each day participating via Zoom. “It’s the open-mindedness of my neighbors that gives me hope we can all get through this,” says Wieser.

The teacher she hired is credentialed but an unemployed substitute. Some older and more experienced teachers are retiring early and striking out on their own to avoid the potential health threat of facing a classroom full of students. The trend has picked up steam so fast that statistics to measure it are still guesswork. But a Facebook page for this kind of microschool learning in the Sacramento area gained nearly 1,000 followers in less than a month.

Diana Hilton, who owns A Brighter Child, one of the only homeschool-supply stores in the Capital Region, says that since regular classrooms were disrupted in March, she has seen more bewildered parents showing up in her store for the first time, forced into a world for which they are unprepared.

Other businesses are doing their part to help parents and students get through this. Comcast is providing free or low-cost internet service for qualifying families through its Internet Essentials program, creating a vital digital lifeline for the approximately 165,000 families in the Capital Region already signed up.

And PowerSchool, an education technology software company based in Folsom, has grown its Schoology virtual learning program to become one of the most popular in the country, used by 20 million students nationwide. Developed specifically for K-12 education, it enables schools to create, manage and share academic content on one platform. Teachers and students can share lessons and administrators can evaluate student progress. It gives parents regular updates as often as they want and sends notifications when assignments are late. Since the  shutdown from the pandemic in March, PowerSchool has seen Schoology’s peak usage increase 400 percent.

That’s a valuable contribution from the technology segment of the region’s economy at a time when all of us — parents, teachers, students, neighbors and businesses alike — are zooming together through a challenging school year.

Stay up to date on the effects of the coronavirus on people and business in the Capital Region: Subscribe to the Comstock’s newsletter today.

Comstock’s founder and publisher shares her thoughts on new innovations that may ease the post-pandemic economic recovery.

As crises collide, teachers already stretched thin are leaning on powerful unions to make online classes work. Is this a new beginning or the beginning of the end for school as we know it?

This spring, COVID-19 forced schools to go online. But, for the most part, the teaching models remained the same. Sama Learning, a Nevada City-based startup, wants to transform those models.

Comstock’s spoke with Yoshikawa about helping students navigate the complexities of the college admissions process and how Creative Marbles has adapted to the new normal.