Back Article Jun 30, 2022 By Laurie Lauletta-Boshart

​​Lionakis, Sacramento’s oldest and largest architecture firm, was on the hunt for a new headquarters site. The firm had outgrown its original space on 19th Street and had staff dispersed throughout three different buildings.

“As we outgrew each building, we began to be more disconnected,” says Laura Knauss, principal and education leader at Lionakis.

Lionakis searched for a site that would keep them in Midtown’s R Street Corridor but accommodate all 150 local employees under one roof. Ironically, the firm found it directly across the street from the original site. “We could see the barrel roof structure of the building from our office windows and often wondered what it looked like inside,” says Knauss.

The building — a former Weaver tractor showroom — had been carved into multiple tenant suites over the years with 9-foot-high acoustic ceilings that hid the exposed portion of the ceiling. The firm embarked on an extensive adaptive reuse of the historic 40,000-square-foot building, redesigning the structure from individual suites into a single soaring space. Four original barrel vaults were exposed, including the largest volume with 26-foot-high ceilings that serve as the firm’s major studio space and feature innovative elevated rooms known as treehouses that function as quiet workspaces. They also turned out to be ideal sites for making companywide announcements, since the entire structure can be viewed from on high. 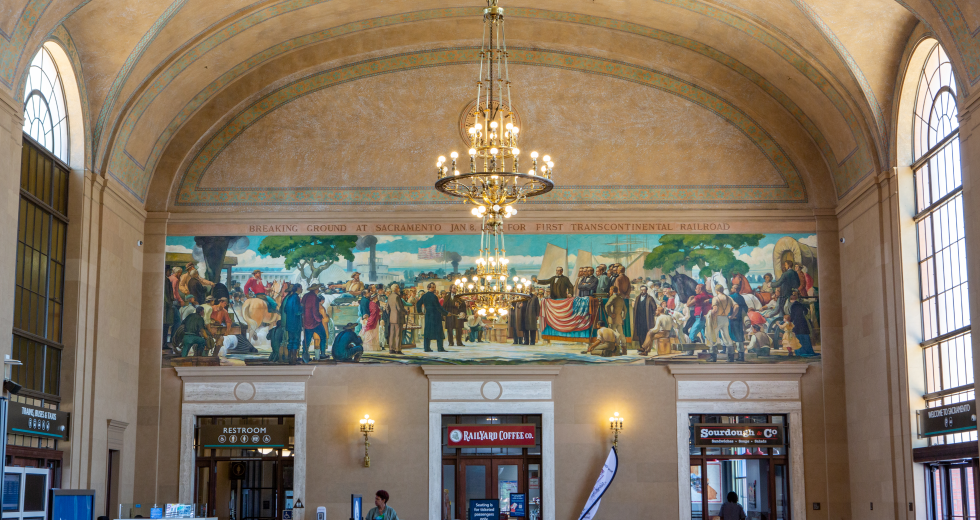 Lionakis also exposed a series of clerestory windows that had been covered over. Vertical wood fins were added to the lower roof square footage on 19th Street, creating an element of protection from the sun. The firm engaged all staff in the design process, taking a holistic approach that embraces employee wellness. The result includes workstations with collaboration spaces, indoor and outdoor gathering and huddle spaces, and a large lobby and cafe area with glass roll-up doors to the outside, creating a space for employees to gather at lunchtime and breaks. Previously, staff would often take their lunch to conference rooms or eat at their desks. “Now they can eat together, mix with other colleagues and departments more easily,” Knauss says.

“We think of this building as a living lab. We designed the space to have enough room for permanent desks for all employees, if needed. But until then, we are using this flexible arrangement.”

Some workers are partially remote while others come into the office. The desk-sharing app Flowscape is used to reserve a space when staff work in the office. “We think of this building as a living lab,” explains Knauss. “We designed the space to have enough room for permanent desks for all employees, if needed. But until then, we are using this flexible arrangement.” So far the process has been successful. Lionakis moved into its new headquarters in April 2022.

Preservation projects are being embraced in the Capital Region in an effort to preserve history and protect the environment.

Stark and sterile health care buildings are falling by the wayside as architecture firms design for a more supportive patient experience.

The commercial construction industry quickly adapted during the pandemic and continues to adjust its practices.

Architects are teaming with local jurisdictions to include accessory dwelling units and tiny houses in the affordable housing conversation.

Factoring in local matches, a common requirement for federal grant awards, the money could go much further.