In agricultural communities, adapting to change comes with the work. This year, the region’s farmers have endured a late-season frost that wiped out crops, a wildfire that threatened rural land in July and the ongoing drought. At the same time, they’ve been dealt another blow: the highest inflation rate in more than 40 years.

“Everything from the polypropylene bags that we buy to make our logs into — those have gone up 50 percent. The straw has gone up over 50 percent in the short nine months that we’ve been in operation,” says Courtney Young, who, with her husband Levi, launched the gourmet mushroom farm Underdog Acres last fall. They use straw to produce a higher yield of their blue and pearl oyster mushrooms, which grow naturally on wood. “We were basing our business model on costs that were stable for the last decade.” 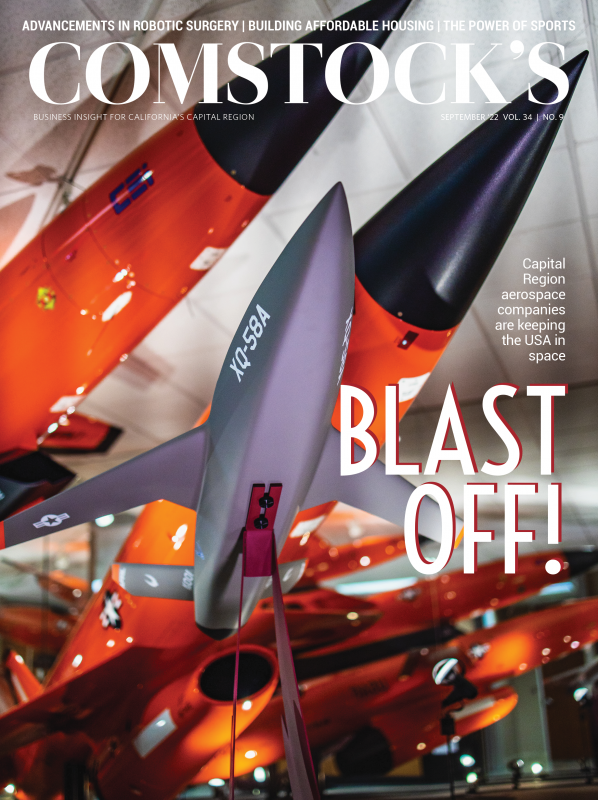 But the high inflation rate has put pressure on the business model of some of these farms and influenced the buying habits of some shoppers. “I’m more conscious about how much I buy and what I’m looking for,” says Greg Traverso as he shops at the Amador Farmers Market in Sutter Creek. “I used to come and just buy a lot, and now I try not to waste.”

While peaches, berries, zucchini and tomatoes were in abundance this summer at local markets, shoppers felt the sting of inflation. During the popular Sunday market at Sacramento’s Arden Fair Mall in July, organic farmer Ruthanne Jahoda relays a customer’s observation that prices seem to be up $1 at every stand from the week before.

“He doesn’t know that my seed is up $5, and my baskets are up $3,” she says. “Inflation is hitting us at our resources and then we either have to up our prices to the customers or we have to eat it. And sometimes you can’t.”

The Bureau of Labor Statistics calculates the Consumer Price Index, the most widely referenced measure of inflation, using the average change over time in the cost of a “market basket of consumer goods.” Those goods include some of the things that might fill a real basket at the farmers market, including eggs, potatoes and apples, as well as other routine purchases like gasoline and rent. (Economists, however, prefer to consider inflation through the lens of the “core CPI,” which excludes food and energy because those categories have the most volatile prices.)

In June, the annual inflation rate for all items hit 9.1 percent — the highest in 41 years. As of August, it was at 8.5 percent. In a survey Pew Research Center conducted this spring, seven in 10 respondents said inflation was the country’s top problem.

“It makes it harder to sell your food when people are so worried about prices,” says Jahoda, who runs Shared Abundance Organic Farm. “They’re not just choosing for their health or their menu anymore. They’re choosing by what they can afford.”

The proprietors of Amador County’s Underdog Acres have faced their share of challenges their first year in business. After starting their first mushroom crop in October 2021, they experienced a record snow this spring; a few months later, they had to evacuate because of a wildfire. In early July, they kept their eyes on the Electra Fire, which also threatened the area.

But during a Wednesday morning market in June with California’s Capitol in view, the Youngs are in good spirits. Levi and Courtney’s 11-month-old, River, smiles in a playpen behind Underdog’s display of oyster mushrooms, while Courtney touts the product’s health benefits. “Mushrooms are protein, they’re nutrient-dense and immune-boosting,” she says. “It’s just a crop I really believe in.”

The Youngs sell their mushrooms at markets in Sacramento and Amador counties. Courtney said that higher costs have limited the varieties they grow. They originally planned to offer four mushroom varieties year-round, three of which use a more costly sawdust substrate. But recently they’ve focused on oyster mushrooms, which grow more quickly, with the less expensive straw substrate.

They also sell mushrooms wholesale to restaurants in the two counties, which they deliver two to four times per week. Gas prices hit an all-time high in the Sacramento region in mid-June, according to AAA. Nationally, prices jumped nearly 60 percent that month from the previous year, according to the BLS.

Courtney says it isn’t a good time to raise prices, and they even lowered their wholesale prices to stay competitive. “We’ve been absorbing a little bit of that cost, especially as we’re building business,” she says. Other market vendors who have been at it a while have had to pass those rising costs onto the customer.

Taylor Zapata says she had to raise her prices after she took on management of Wheatland Natural Beef after her father, Larry Benninger, passed away in December. She and her husband Zach raise and sell beef, pork and lamb products at markets in Rocklin, Lincoln and Sacramento. Zapata says they raised their ground beef prices by $1 and $2 for prime cuts, but that they always have something on sale to incentivize customers. Still, fewer people are willing to spend a few hundred dollars on weekend barbecues these days.

“We still have a lot of loyal customers but they don’t buy as much,” Zapata says while her 3-month-old daughter sits behind her. “We get a lot of, ‘We want to support you, but we’re hurting as well.’”

Zapata said it’s her career as a Realtor that has kept the ranch afloat this year. “I can’t shut it down yet,” Zapata said at the Arden Fair Mall market. “If we can survive this economy then we can survive anything else.”

Nai Saechao is another market vendor who came to the field by way of his parents. He and his four siblings sell raspberries, blackberries and blueberries that they grow on Yoon Chao’s Farm, a 7-acre Marysville farm that his parents launched in 1996 after coming to California as refugees.

Like Zapata, Saechao and his siblings have primary jobs in addition to running the markets from Chico to Sacramento and helping with the labor on the farm, where their parents work. He says their rising operating costs have included packaging costs and gas — the top driver of inflation — but since it’s a family-run farm, they save on labor.

“When we’re not at the market, we’re at the farm,” he says. “Because we’re doing the work ourselves, we tend to keep the prices kind of lower.”

As Chuck Wiegman describes his homegrown organic garlic varieties from around the world, a woman drops by to find out if he has any black garlic left. It’s the last hour of the market, so he doesn’t, and she says she’ll try to get there earlier next week. “I grow a lot of varieties, I don’t grow a ton of volume,” says Wiegman. “I grow anywhere from 15 to 18 varieties of garlic every year.”

He says seed prices have shot up, especially those that needed to be imported. Due to the rising costs he raised his price to $3 per head this year — his first price bump in almost a decade.

But he adds that he gives customers a deal on higher-producing crops, like tomatoes and zucchini.

Most anyone on the shopping or selling side of a farmers market will tell you that the quality of the products there can’t be beat by a grocery store. In-season, local produce like summer strawberries and tomatoes are typically more flavorful than grocery store produce, and there’s the benefit of meeting those running the farm or ranch.

According to Ron Antone, lavender vendor and site coordinator at the Sutter Creek farmers market, many of the vendors in the network of Amador County markets are small-scale farms that use organic practices. “Growing vegetables this way costs a little bit more,” he says. “But there’s nowhere near the quality (at the supermarket), and people recognize that.”

Vincent Garcia runs a popular fruit and nut stand at the Sunday market, where they raised prices from $2.50 per pound to $3 this season on their peaches, nectarines and other fruits. In a year of rising costs, quality “is our only weapon,” he says. “Keeping our great quality so people are willing to pay for it. We’re not giving up, not yet.”

Growing the Table is a statewide initiative that connects farmers from underserved communities with families in need.

Disruptions come with a price, whether it be a disappointed customer, a lost market share, or high costs — inflation — when supply and demand are out of balance. Comstock’s president and publisher reflects on how inflation is impacting our communities.

Inflation impacts every aspect of our life, but these challenging times can also offer opportunities, even for those with limited expendable income.

Both the Davis and Sacramento food co-ops have expanded exponentially since their inception in the early 1970s, when they primarily served ”the hippie population.” Fifty years later, has the spirit of 1972 held up?

Yolo County’s most photogenic crop is facing a barrage of challenges, including supply issues related to the war in Ukraine, global currency volatility and drought.