Ken James is a 24-year veteran photojournalist who started his career with the Fairfax Newspaper Group in Sydney Australia. Since relocating to California in 2002, Ken has contributed to many newspapers and wire services such as Bloomberg News, United Press International (UPI), The New York Times and San Francisco Examiner. In 2005, Ken spent six months covering the Iraq war and later documented the aftermath of Hurricane Katrina. Ken has actively covered state politics and gubernatorial elections, including the 2003 Recall. Besides covering national and local news events, Ken contributes monthly photo essays to Comstock’s and Sacramento Magazine. For more, visit www.kjamesimages.com.

For business owner Ginger Hahn, her eponymous Sacramento chocolate shop is about more than sweets. It’s about freedom.

What started with the advent of online job boards like Monster and Yahoo! HotJobs in the mid-1990s has at last evolved into what some are now calling the Facebook of job searches. In the age of Resume 2.0, where the standard, static and flat resume just won’t cut it, a new company has emerged to help employers and potential hires cut right to the chase.

A hundred years ago, the California State Fair had a sure-fire way to entertain crowds: Operators would send two steam locomotives crashing into each other at 90 mph for pure spectacle. Today, Sacramentans with an eye on Cal Expo are still thinking big.

Sac Town revelers along K Street seem oblivious to new coordinated efforts by the Sacramento police, city officials, pubs, clubs and bars to deploy new layers of security and preparedness which, well, probably account for the harmony on this Friday evening in March.

About four decades ago, Bob Clark and his brother Don began to work as weekend janitors for Clark Pacific. As young teens, they would tag along with Dad to work and earn a buck. Today, they are co-presidents of that same company, responsible for more than 500 employees and $75 million in annual revenue.

Gary Morton has a dream and a car. If his dream comes true, like those of Henry Ford and Karl Benz before him, Morton will turn his prototype into a car company.

But Morton is not looking to build a big assembly plant or an extensive dealer network. His production will be limited to just one model that will offer baby boomers the nostalgia of the muscle cars they drove in their youth alongside their modern commitment to a pollution-free environment.

It’s lunchtime at Fred T. Korematsu Elementary in Davis. A cafeteria monitor stands over the first, second and third graders, but she is only a scarecrow.

On a drizzly afternoon in downtown Sacramento, Drewski’s Hot Rod Kitchen is hard to miss.

In one of the first actions designed to help the city of Sacramento move forward next year, the City Council OK’d a proposal concerning where we all stop.

City dwellers driving past the expansive cotton fields and scattered farmhouses along Highway 43 to Corcoran might get the feeling they’ve left California. A haze of dust, bugs and little particles of cow dung blanket the road between Fresno and Bakersfield. Even on a nice day, wiping debris from a car windshield begins to feel futile.

Salon owner Carol Milani had never invented anything before, but she needed a way to keep her strong and fearless Bengal cat from escaping the yard.

The day Clark Pacific won the bid to provide the concrete components for the 49ers’ new football stadium in Santa Clara was a day for much celebration. It was a $20 million award. It meant new jobs. It meant an economic boost for the region.

When Kelly Sassman started giving Pilates instruction at her Sacramento studio 12 years ago, people couldn’t even pronounce the name of the fitness program.

As Bay Area businesses begin to regain their financial footing, the city of Tracy is aiming to capitalize on a growing need for industrial space in an accessible, affordable zip code.

On a sweltering day in mid-June, more than 100 newly minted teachers assembled for graduation at The Robert and Margrit Mondavi Center for the Performing Arts.

It was sometime in 2004 when Larry Booth and his brother Martin swallowed the truth that they wouldn’t live forever.

The housing market may still be depressed, but here in the Capital Region there is no scarcity of talent when it comes to residential architecture and interior décor.

The future of community growth in the Capital Region hinges on the fate of several habitat conservation plans slogging through the development pipeline.

It’s a case of David versus Goliath. A tiny, privately held Rocklin company is taking on multimillion-dollar competitors with a lightning-fast technology that’s more sophisticated than the competition’s. 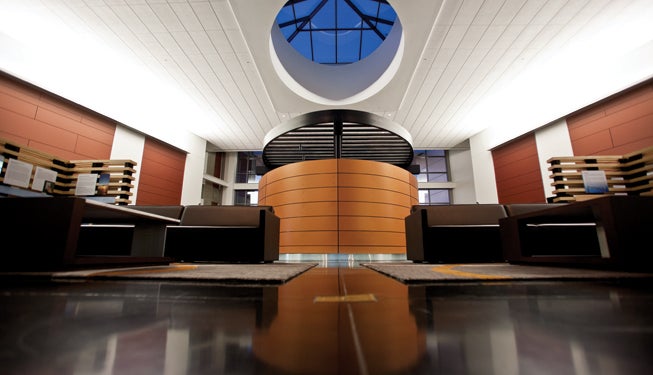 As Sacramento attempts to forge a regional economic development strategy, manufacturing is being touted as a potential breadwinner, but rebuilding the industry piecemeal could take time.

Forget books, exams and professors. The campus buzz at Stockton’s University of the Pacific is about the hottest new idea in off-campus housing: Lofts at the University Plaza Waterfront Hotel.

The black widows caged in professor Craig Vierra’s laboratory evoke the macabre. But here, in the Department of Biological Sciences at Stockton’s University of the Pacific, these crawlers are the story’s heroines.

It didn’t take German immigrant Martin Hermann long to see California as the land of sunshine. And within that bounteous golden glow, he imagined opportunity.

The Capital Region’s tenant improvement market is trudging along, mired by a deep air of malaise following years of construction decline.

When Sacramento-based Breuner’s furniture store chain closed its in-house upholstery shop in 1971, the eight seamstresses and upholsterers were told that, if they opened their own shop, Breuner’s would send its work their way.

Faucets on. Streets clear. Trash gone. Most city dwellers take for granted the infrastructure of daily life. And, except for monthly reminders supplied by bills, utility providers generally remain far from consumers’ minds.

When Eric Hart ended his eight-year military term, he felt like he was missing a sense of purpose. He tried a few corporate jobs, but he didn’t feel at home. He preferred working outside with his hands, and he wanted his job to serve something higher than a paycheck.

Developers revamping the 700 block of K Street are turning back the clock on a blighted avenue that was, half a century ago, a thriving business and residential hub.

During the building boom, contractors had to keep a sharp eye on the rising cost of materials if they wanted to make a decent profit. From 2004 to 2008, double-digit increases were the norm for many products.

The city of Lincoln has embraced an alternative mode of transportation — the neighborhood electric vehicle — and so has Sacramento Valley Golf Carts, the city’s only sales and service center for golf carts and NEVs.

Inside a concrete warehouse a few miles past Sacramento International Airport, an 80-pound white sturgeon is hauled onto a table, sliced throat to tail and relieved of its egg-stuffed ovaries. Workers at Sterling Caviar LLC pack the meat on ice, ship the roe elsewhere and repeat the process.